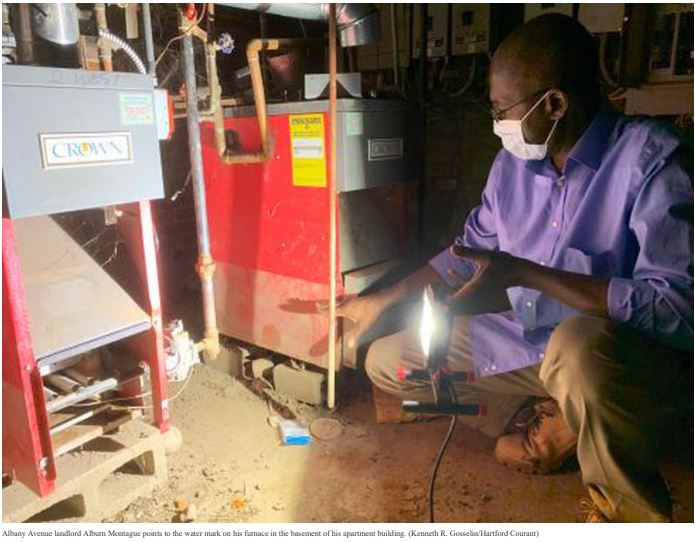 This excerpt from Kenneth R. Gosselin’s article that was published in the Hartford Courant on October 29, 2021, illuminates only a fragment of the existing level of frustration being faced by residents and business owners in the Hartford North End after experiencing major flooding by the late summer storm Fred and Hurricane Ida. The images contained in this post are credited to Gosselin/Mirko/Hartford Courant.  According to the article, the questions and comments of these constituents include:

“Why is it that people in the Upper Albany area area, the Blue Hills area, the Granby Street area and all those areas that are predominately Black are having to deal with these issues?” said June Lyons, a resident on Sargeant Street whose basement flooded during Storm Fred in August. “Why can’t it be rectified? I really do think this is part of environmental injustice and the
inequalities that we have to deal with…People are just fed up…It’s just really frustrating to know that every time it rains, you think, ‘ah, damn.’ You’re just constantly checking to see whether or not there is going to be some flooding.”

The article reported that June Lyons, currently runs a business out of her home selling body butter and other skincare products. Over the years, she has dealt with modest
water back-ups in her basement which made her finally purchase plastic storage tubs to reduce the volume things to drag out, dry out and put back. However, Lyons was not prepared for the near two feet of water in her basement after Fred hit.  This resulted in damage costing $7,000 to repair. In the image above (2nd from the top), Lyons shows a video in which she can be heard sloshing through her flooded basement, and she explained another sound. “That’s me, crying,” Lyons said. “There was a lot of water, but thank God, I didn’t have any sewer.”

The article continues…landlord Alburn Montague owns property located a couple blocks away from Lyon’s property.  His was a more traumatic experience because the flooding from Ida, caused raw sewage to back-up into the basement of his apartment building, and knock out the controls to the six boilers that heat four apartments and two storefronts. “It was a strong odor down here,” Montague said. “I threw bleach and things down here to help, too.” In the image above (last one at the bottom) Montague points a flashlight toward the boilers where high-water marks were visible, despite the boilers being up on cinderblocks. He asserted that costs to repair the damages will run in the tens of thousands of dollars.

According to the article, the MDC explained that in Upper Albany, the combined sewer and storm water systems on Albany Avenue likely need to be separated. The project could cost $20 million to $35 million, the MDC says, coming just a few scant years after a major, $30 million road and streetscape project was completed.  Hartford Mayor Luke Bronin said the city is working with the MDC on short- and long-term resolutions, with separating sewer and storm water systems in mind. In some cases, special valves can control back-ups, Bronin said. But despite any upgrades, the underground pipe system in Hartford is nearly a century old in many parts of the city and even new, larger pipes still may not be able to handle sudden, violent downpours, Bronin said. “At the end of the day, this is a problem that we feel extreme urgency to fix,” Bronin said. “But we also have to acknowledge that it’s the result of changing weather patterns that are going to change the way we live in this community and every community.”

Senator Douglas McCrory was a guest speaker at the capstone MKT/MGT 282 class at the University of Hartford on Monday, October 18, 2021.

Temple Body Butter is in the spotlight! At a national level, October is Women’s Small Business month. During an interview with the Women’s Small Business Center, June Lyons graciously applauded UAMS for the assistance its staff provided in establishing her business. Thank you, June! We are pleased to know that our work is appreciated. We wish you continued success in all your endeavors.